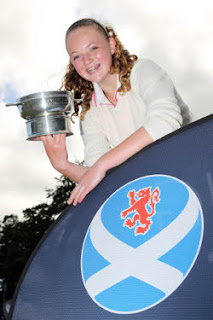 Blairgowrie’s Bradley Neil has successfully defended the Loretto School Scottish Boys U14s Championship at a wet and windy Auchterarder with a narrow one-stroke victory in Perthshire.


The 14-year-old, who finished second at the Scottish Boys U16s earlier this week, went one better to secure historic back-to-back titles. Neil recovered from an opening bogey to post an excellent two-under par round of 67 to win by one from City of Newcastle’s Jack Hermiston.

Neil bounced back immediately and almost holed his tee shot at the par 3 fourth, setting up a tap in birdie. The Scottish Internationalist's momentum continued as he went on to birdie the 6th and 7th to help him to two-under par at the turn. Birdies followed at the 11th and 13th but just as Neil looked like he was going to blow the field away the national Academy player dropped two shots with bogey fours at both 16 and 18 to finish two-under par.

Neil was delighted with his victory and highlighted the importance of his tee shot at the fourth hole following a slow start:

“My tee shot at the fourth really got me going, I had bogeyed the first after driving into the bunker off the tee but to get a quick birdie back was really important and set me up for the rest of the round”

"I am delighted to be able to overcome a strong field to defend my title. I didn’t feel too much pressure today as I just took it as another round as I always do, I knew it was going to be tough though and that I needed to shoot low to win.”

The Perth & Kinross star was modest in victory and having now achieved his goals for the year he has set his sights on continuing his progression and continue his winning form for many years:

“At the start of the year my targets were to get down to scratch, get my first Scottish cap and defend my under-14s title, I’ve now achieved them all which I’m really pleased about”

Add that to a runners-up spot at the Scottish Under-16s Championship and becoming the youngest ever Club Champion at home club Blairgowrie it’s been an exceptional season for Neil so far.

Young Englishman Jack Hermiston finished in the runners-up spot after a fine one-under par 68. Hermiston opened his round with seven pars and two birdies to put him in contention at the turn, his one-over par back nine was enough to seal the Silver Medal.

One of the top performances of the day came from Inverurie’s Darren Smith, a 11-handicapper who fired a two-over par 71 to take 7th place. Smith, who is coached by National Academy coach Neil Marr could have been even better but for a ball out of bounds at the 7th which led to a double bogey.

Meanwhile, Milngavie's Lewis Reid took the Under 12's Championship with a 77, winning on a six-hole countback from Skipton's Robert Nesbitt.

In the Loretto School Scottish U14s Girls Championship, the title went to West Kilbride’s Connie Jaffrey after she posted a tremendous two-under par 68 to edge out Clara Young from North Berwick by two shots.


Jaffrey was a magnificent seven-under par during an exceptional ten-hole spell which included an eagle three at the par five 15th. The Ayrshire youngster’s victory could have been even more impressive but for a double-bogey five on the final hole.

“This year’s event was excellent yet again on a fantastic golf course here at Auchterarder. It’s great to see so many good young players here, from Scotland, England and a strong overseas contingent. The scoring was very impressive considering the tough conditions and really illustrated the strength of this championship.”

“Loretto School is very proud to continue our support of the SGU and SLGA and congratulate both Bradley and Connie on their victories.” he added

Other Ayrshire scores in the boys and girls events were :-