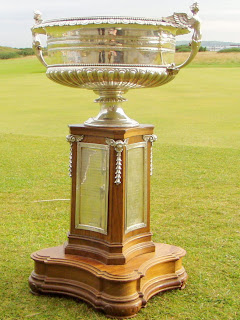 17 Ayrshire players will be bidding for the 2010 Scottish Amateur Championship title when the event takes place at Gullane No 1 from 26th to 31st July.

Boys Internationalist Jack McDonald (Kilmarnock Barassie) is the first Ayrshire player in the fray, teeing off at 0653 on the Monday morning in game no 2, against Alan Welsh (Torrance House).

David Strachan (Turnberry) is off in game 10 at 0757 against Allyn Dick (Kingsknowe) whilst Michael Smyth (Royal Troon) begins his bid, in game 24, at 0953 against Scott Crichton (Aberdour).

Former championship finalist and Scottish Internationalist Steven McEwan (Caprington) plays in match 52 at 1345 on the Monday against Stephen Carruthers (Pitlochry) and shortly afterwards, in game 54 at 1401, George Robertson (Irvine Ravenspark) is in action against Jordan Findlay (Fraserburgh).

New Ayrshire Matchplay Champion Euan Brown (Kilmarnock Barassie), who reached the last eight in the event last year, is in match 57 at 1425 against Angus Weir (Crieff) whilst late in the day a further three Ayrshire players begin their title bid.

Former Ayrshire matchplay Champion Scott Brown (Turnberry) tees off at 1605 in game 69 against Colin Mundie (Falkirk), Marc Smith (Troon Welbeck) is in the following game at 1613 against Andrew Wallace (Glenbervie)  and the Ayrshire challenge on day one is rounded off by former Ayrshire Boys Champion Cameron Gray (West Kilbride) at 1621 in game 71 against Fraser campbell (Milngavie).

The remaining four Ayrshire players do not begin their respective bids for the title until the Tuesday morning.
Match 81, at 0733 on the Tuesday, features Chris Harkins (Ayr Belleisle) and Michael Robertson (Selkirk) whilst former Ayrshire Boys Champion Jamie Mackay (Kilmarnock Barassie) plays Brendan McKenna (Pollock) in game 83 at 0749.

The lats Ayrshire player in the field is Ayrshire Boys Champion Colin Robinson (Largs) who begins his bid at 1353 on the Tuesday in match no 127, the penultimate first round match, against Paul Ferrier (Baberton)
Posted by AJM at 1:14 am