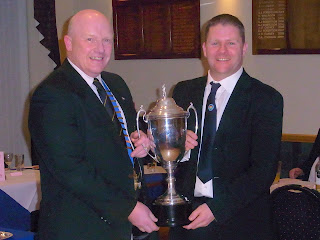 the four semi finalists in the 2010 Ayrshire Champion Of Champions competition have been decided, after the quarter final matches were completed this week.

Scott McCahill (Maybole) won his away tie against Craig Robertson (Abbotsford) in the quarter finals by 3 & 2 and now faces a semi final match against Lee Jenkins (Beith), who reached the last four with a 2 & 1 home win over Jamie Mackay (Kilmarnock Barassie).

Title holder Tommy McInally (Loudoun) - pictured above - had already secured his semi final place earlier in the month, and in the semi final will face a tought match against Steven McEwan (Caprington) whose six under par figures after 12 holes saw him progress to the last four with a 7 & 6 home win over Kevin Brock (Prestwick St Nicholas).

The two semi final matches will take place at Royal Troon on Friday 6th August with a 5.00 p.m. tee off, with the final being played at the same venue on friday 13th August.
Posted by AJM at 1:13 pm