﻿﻿﻿﻿﻿﻿
Irvine (Bogside) are the Ayrshire Junior Golf League Champions once again, 20 years after their last success in the competition. 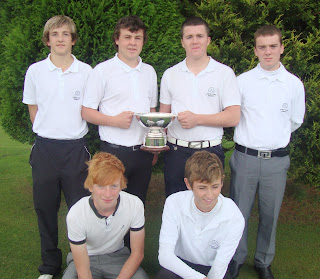 After winning the title three times in four years from 1988 to 1991, the Irvine club's fortunes slumped and for a number of years they dropped out of the competition altogether. The recent resurgence in the fortunes of the junior club was crowned on Sunday 18th September when they defeated Annanhill in a nail biting finale to the season at the rearranged final over the Loudoun Gowf Club course, which had been postponed due to torrential rain the previous week.
On this occasion the players enjoyed dry conditions with a little breeze to contend with, and the teams fought a closely contested final which was decided by the last putt on the final green, with the match being drawn 3 - 3 and Irvine taking the title by virtue of a count back over the scores of the individual ties, thus denying Annanhill their first ever championship title after being runners up in 2003 and in the first ever championship in 1969.

Chris Hobson led the Irvine side in game one, against Darren Young of Annanhill to whom he was giving two shots. After Young won the opening two holes, the remainder of the outward nine saw holes exchanged and resulted in Young turning for home three ahead. Hobson fought back however and when he took the sixteenth and seventeenth holes the deficit was reduced to one hole. Despite the fightback, Young showed strength of character in holing a tricky 10 foot putt at the final hole to secure a one hole victory and put Annanhill one ahead.

Ayrshire Under 18 county squad member Jack Thomas was giving four shots to Annanhill's George Boswell in the second tie and it was Boswell who led by two holes after nine. In the inward half, the experience of Thomas, a member of the SGU Academy Programme, came to the fore as he won six successive holes to run out a winner by 4 & 3 to level the match score.


Irvine's Greg Cathie gave five shots to Sean Cook in the third tie and the match was a closely fought affair until Cook won three successive holes from 12 through to 15 to set up a 3 & 2 win and put Annanhill 2 - 1 ahead.

Like his team mate Greg Cathie, Nick Carr gave five shots to his opponent Ross Caddis and like the previous tie the players traded holes until Caddis won successive holes at 13 and 14 to set up an eventual 5 & 4 win and put Annanhill 3 - 1 ahead.

With Annanhill just one half match away from taking the title, attention turned to the remaining two ties on the course. In the fifth tie Irvine's Stuart Fairgrieve gave three shots to Scott McLellan but despite this Fairgrieve took the first two holes of the tie and he maintained the advantage, extending his lead to three holes at the turn. A birdie three at the 12th hole put Fairgrieve four holes ahead and he closed out a 5 & 4 win at the 14th to maintain Irvine's title hopes by bringing the match score to 3 - 2 for Annanhill.

All eyes were now focused on the final tie between Irvine's Ben Jackson and Annanhill's Scott Banks. Banks received three shots from Jackson, and it was banks who held a one hole lead by the turn.

Jackson won the 10th hole to square the match and then took the lead for the first time when he also took the 11th hole.

As the players reached the 14th hole, the position of the other ties was such that all were concluded and this tie remained the only one on the course. As the crowd of spectators gathered around this match, knowing its importance, Jackson won the 14th hole to take a two hole lead in the tie.

Banks scrambled a good half at the 15th but when he found trouble from the tee at the 16th it looked likely that Jackson would win the hole and the match. Possibly with the pressure of the importance of the tie in his mind, Jackson's first effort from the front of the green came up 10 feet short of the hole and he was unable to convert the next putt for a winning par, allowing Banks an unlikely half, but leaving him dormie two ahead.

The short 17th hole saw both players miss the green, Jackson coming up short and Banks going right to leave a tricky chip. Jackson played a good chip to 5 feet above the hole whilst banks played an excellent shot under pressure to just 3 feet below the hole. Jackson made a good put but failed to hole his effort for a par three, having to hole a good return putt for a four which left Banks needing to hole his 3 foot par putt to keep the game, and Annanhill's hopes alive. To his great credit, Banks holed well and the tie proceeded to the final hole with Jackson still one in front.

At the final hole, Jackson simply needed to hold on to his one hole lead to ensure a 3 - 3 draw for Irvine, who would then win the match 17 - 15 on the count back over the individual ties, whilst a win at the final hole for Banks would give him a half in his tie and give Annanhill the title with a 3.5 - 2.5 match score.

Both players were a little right from the tee and were unable to reach the green in two. With Adrenalin no doubt pumping, both players saw their approach shots run through the green and into heavy rough behind.

Jackson was first to play his fourth shot and played a good shot which came to rest just four feet from the hole. banks' effort from the rough was a little strong, running some 12 feet past, but despite some nerves Banks stroked the putt well and his ball dropped into the hole for a five, leaving Jackson with an incredibly important four foot putt for a half. Hole it and Irvine would be the champions for the first time in 20 years, miss it and the title would go to Annanhill for the first time in their association with the Ayrshire Junior Golf League.

Jackson rose to the challenge, slotting home his putt for five to secure a one hole victory over Banks and give Irvine the League Championship at the end of an enthralling final.