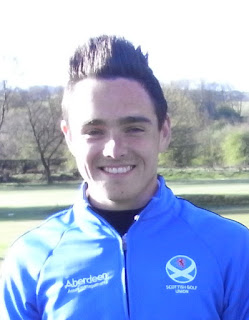 Stuart Easton (Irvine) carries Ayrshire hopes into the quarter finals of the Scottish Amateur Championship, being held this week in Prestwick, following completion of two rounds of matchplay on Thursday 3rd August.

Ayrshire had five players in the round of 32 on Thursday morning, with one destined to exit the competition as Stuart Easton faced Bruce Caldow (Kilmarnock Barassie) in an all Ayrshire tie. In the event it was Easton who progressed in some style with a 6 & 5 win.

Michael Smyth (Royal Troon) suffered the agony of a final green defeat to Sam Locke (Banchory) on Thursday morning whilst the other two Ayrshire club members still in the competition also bowed out at the same stage.

Jonathan King, who is a member of the host club at Prestwick, lost out by 3 & 2 to Eamon Bradley (Mount Ellen) whilst Scott Brown (Prestwick St Cuthbert) lost out to Chris McLean (Balmore) by 2 & 1 despite taking an early three hole lead after five holes in their tie.

In Friday morning's quarter final stage, Stuart Easton will play Ryan Lumsden (Royal Wimbledon) who reached the final by beating Craig Ross (Kirkhill) at the second extra hole by virtue of scoring his first ever hole in one, at the short second hole on the Prestwick links.

The quarter finals and semi finals will be played on Friday, with the 36 hole final scheduled for Saturday.
Posted by AJM at 11:44 pm