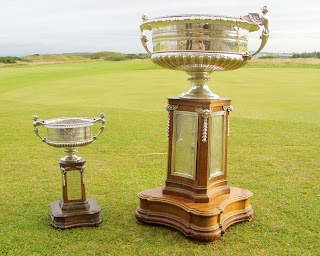 Thirteen of the forty four Ayrshire players who started in the Scottish Amateur Championship on Monday morning have made it into the matchplay stages after the two qualifying rounds, played at Prestwick and Prestwick St Cuthbert on Monday 31st July and Tuesday 1st August, were completed.

The cut fell at 149, 7 over par, after two days of testing conditions at the two Prestwick venues.

The matchplay rounds continue throughout Wednesday, Thursday and Friday with the 36 hole final scheduled to take place on Saturday. All remaining play will be over the Prestwick links.

The qualifiers, their scores and the scores of all the other Ayrshire players are:-


Six of the Ayrshire qualifiers made it into the matchplay stages right on the cut figure of 149 and as a result they will be involved in first round matches on Wednesday morning.

The first round matchplay ties play off from  8.a.m. on Wednesday and the second round of matchplay begins from 10.24 that day.

There is an all Ayrshire second round match when Jim Johnston (Ayr Belleisle) plays Bruce Caldow (Kilmarnock Barassie).
Posted by AJM at 10:25 pm