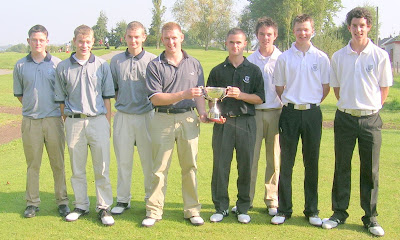 Rowallan Castle and Ayr Dalmilling have claimed two of the four semi final places in the 2017 Ayrshire handicap League Championship.


In LEAGUE A, Royal Troon moved into second place behind Troon St Meddans,  with a 5 – 1 home win over Loudoun.

St Meddans have away matches at Loudoun and Drongan to play, whilst Royal Troon have an away match at Ballochmyle and a home fixture against Stewarton still to complete.

Present postions in League A are:-

In LEAGUE B, Rowallan Castle are through to the semi finals after completing their fixtures.

Beith could match Rowallan Castle’s points total with victory in their final match, but would be unable to overturn their tie difference over all the matches.

The only result reported this week was a 3 – 3 draw between Ayr Seafield & Moorpark.

Present positions in League B are:-

In LEAGUE C, Largs Routenburn have moved to the top of the table following two convincing home wins recently.

A 5.5 – 0.5 win over the league leaders Auchenharvie 88 was closely followed by a 5 – 1 win over Prestwick St Cuthbert, which ended the St Cuthbert qualification hopes and took Routenburn to the top of the table with all their fixtures now complete.

Present positions in League C are:-

In LEAGUE D, Ayr Dalmilling clinched their place in the semi finals with a 3.5 – 2.5 home win over Annanhill in their last fixture of the campaign.

There is just one fixture remaining to be played in League C, with Tam O Shanter at home to Prestwick St Nicholas.

Present positions in League D are:-