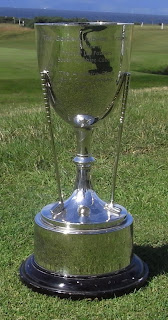 Euan Ferguson (Turnberry) stayed on track in defence of his Ayrshire Boys Matchplay Championship title when the first round of the competition was played over the links of the Prestwick Golf Club on Tuesday 8th August.

In the first of the four matches in the opening round, Ferguson faced Jamie McKinnon (Caprington).

The title holder raced to an early lead, being conceded the first and taking the next two holes with par figures to establish a three hole lead.

Mckinnon reduced the deficit with a winning par three at the fifth but pars at the difficult seventh and eighth holes allowed Ferguson to extend his lead to five holes after eight. The lead was extended further at the ninth, a bogey five being good enough for Ferguson to turn for home with a six hole lead.

McKinnon battled on, reducing the lead to five by winning the tenth, only to see Ferguson step up a gear, taking the eleventh with a par three and twelfth with a birdie four, to progress to the semi finals with a 7 & 6 victory.

In the semi finals, Euan Ferguson will play Ewan Milligan (Kilmarnock Barassie) after Milligan secured a place in the last four with a 5 & 3 win over last years beaten finalist Kyle Brown (Turnberry).

The match was tight throughout the outward nine, with never more than a single hole lead by any of the players, but as the combatants turned from home, Milligan established a two hole lead by winning the tenth and eleventh holes. A four at the long and testing thirteenth was good enough to extend Milligan's lead to three holes and successive par fours at the fourteenth and fifteenth were also sufficient for him to annexe these two holes for a 5 & 3 victory.

In the third tie of the evening, Kieren beauchamp (Turnberry) was up against John Jack (West Kilbride).

It was Jack, the younger of the two players, who took the early initiative, winning the third hole with a birdie four and the fourth with a bogey five to establish a two hole advantage. Beauchamp reduced the deficit with a conceded birdie three at the sixth  but the two hole advantage was restored by jack when he won the eighth hole. Again Beauchamp fought back, winning the ninth to reduce jack's lead to one hole at the turn.

Both players started back well with par figures over the opening two holes before Beauchamp squared the match with a conceded birdie four at the twelfth, only to see Jack take the difficult thirteenth hole with a par four to go one ahead once again.

The players matched each other over the next couple of holes but at the sixteenth Beauchamp could only manage a bogey five and Jack stepped in to win the hole with a four and go dormie two.

A few minutes later, with the seventeenth hole halved in fives, Jack progressed to the semi finals with a 2 & 1 victory.

After winning the opening hole, Muir lost the second but re established a lead with a birdie four at the third.

Par fours at the sixth and seventh were enough to extend Muir's lead to three holes but Wallace pegged one back by taking the eighth to reduce the deficit to two holes at the turn.

A par four at the tenth by Muir restored his three hole lead and following a half in par threes at the eleventh, Muir went four up following a winning birdie four at the twelfth, before closing the match out by winning the fourteenth.

The two semi finals will take place at Prestwick Golf Club on Wednesday 9th August at 4.30 p.m. with the final scheduled for the same venue the following evening, Thursday 10th August, again at 4.30 p.m.
Posted by AJM at 2:10 am