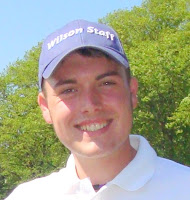 Former Ayrshire Boys Champion Colin Robinson from Largs is starring in his freshman year at the John A Logan college in Illinois.
Robinson was the best scorer in his teams opening tournament of the season and followed that with a second place in the second event.
(Reports, courtesy of the John A Logan college website, are reproduced below)
National powerhouse John A. Logan College opened its fall golf season on a positive note Friday 27th August, edging past Rend Lake College by one stroke, 600 to 601 over 36 holes, at the nine-team Region 24 Preview Tournament hosted by Rend Lake.
Illinois Central College was third at 607. Vincennes University was fourth at 608 and Mississippi Gulf Coast College was fifth at 612.
Top individual performer for the Volunteers was freshman Colin Robinson, a native of Scotland, with a round of 148 (76, 72). The team’s lone sophomore returnee, Filip Timmerman, turned in a 149 (73, 76). Both placed in the top 10 overall. Logan’s third-best scorers Friday were Bryce Doughty and Colin Hendrickson at 151. John Carter followed at 153 as did Derek Rohlfing. Drew Hrvatin carded a 155 and Jared Hogan notched a 157.
“It’s always good to get a tournament win,” said Vols head coach Tom Ferris. “Our team is made up of almost all freshmen. We’ll improve as we go along.”
Last year’s National Junior College Athletic Association Freshman of the Year and perhaps a candidate for this year’s award teamed up on Monday 30th August to lead the John A. Logan College men’s golf team to its second tournament win in less than a week.
Sophomore Filip Timmerman, winner of the Phil Mickelson Award last May, fired a two-day, 36-hole total of 146 (72, 74) to capture the individual title, while newcomer Colin Robinson was one stroke back in second place at 147 (73, 74).
As a team, the Volunteers finished at 598 or nine strokes better than runner-up, Mississippi Gulf Coast (607). Rend Lake was third at 620 followed by Parkland (624), Vincennes (629), Kaskaskia (669), Missouri State West Plains (670) and Mineral Area (682).
Colin Hendrickson of the Vols placed ninth overall at 152 (75, 77). Benton native Bryce Doughty was 10th at 153 (74, 79). Derek Rohlfing (162) was further down the scoring column. Playing as individuals were Drew Hrvatin (156) and John Carter (161).
“It’s good to win your own tournament,” said Logan head coach Tom Ferris. “We will build on this experience and hope to improve as we go along.”
Ferris said he was pleased with virtually everyone’s performance in the tourney, especially, Hendrickson, who was battling flu-like symptoms, yet still managed to finish in the top 10.
Posted by AJM at 2:47 am