The women's team from Skelmorlie Golf Club travelled to contest the Mail On Sunday Women's Classic quarter finals at Worsley Park, Manchester, recently and won through to the semi finals, along with fellow Scots Murrayfield, which will be played in Spain later this year.
QUARTER-FINAL RESULTS
MURRAYFIELD 3, WEST ESSEX 2
SKELMORLIE 3 1/2, CHELMSFORD 1 1/2
BEAU DESERT 3, HAVERFORD WEST 2
WILDWOOD 3, FOREST PINES 2
Skelmorlie, Murrayfield, Beau Desert and Wildwood will travel to El Rompido Golf and Beach Resort on the Costa de la Luz in Spain for a five day trip, from 21 November to 25th November during which the semi finals and final will be contested.
Wishing the Skelmorlie ladies all the best in their great adventure.
(Here's a more detailed report and photo -  with thanks to Gillian Pollock) 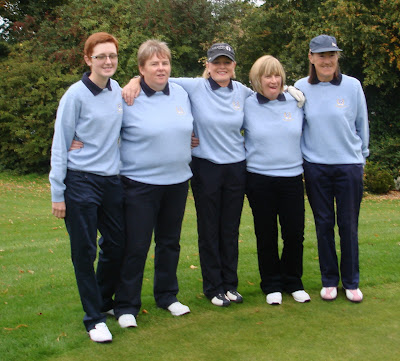 MAIL ON SUNDAY LADIES TEAM CLASSIC 2010
Skelmorlie Golf Club Ladies team have just returned from an extremely enjoyable but stressful weekend competing in the Quarter finals of the prestigious Mail on Sunday Team Classic event. These Quarter Finals were played at the Marriott Worsley Park Golf and Country Club in Manchester.

The seven other ladies teams who competed, fielded strong teams with plenty of reserves to choose from after their practice round on Sunday. Unfortunately Skelmorlie team captain Kath MacKellar was not afforded this luxury of choice.
Although a strong team, Skelmorlie only had five players to choose from - Kath MacKellar, Gillian Pollock, Aileen Donaldson, Janet Harkness and Alex Sargent as the other team member, Jenny McGee, was unable to attend the event as she had been called away to America following her daughter Heather’s serious riding accident. Thankfully Heather is now well on the way to recovery and Jenny will be home shortly because against all the odds, this team of five, from the small club of Skelmorlie in Ayrshire faced the might of Chelmsford in Essex and emerged victorious with a 3.5/1.5 win.
They now find themselves in the wonderful position of being off to the Grand finals to be held at El Rompido Golf resort in Southern Spain, at the end of November.
Posted by AJM at 11:30 pm