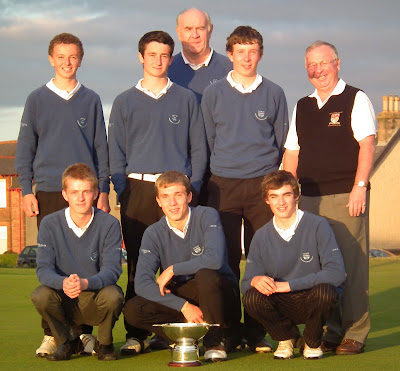 Kilmarnock (Barassie) won the 2010 Ayrshire Junior Golf League Championship with a comprehensive victory over Ayr Belleisle in the final played at Prestwick St Nicholas Golf Club on Sunday 26th September.
The winning team is pictured on the right along with team manager Bill Sherry (back centre) and Ayrshire Junior Golf League Chairman John Nordbo from Largs (far right) - (photograph courtesy of Craig Gilmour)
The 2010 Kilmarnock (Barassie) squad had a 5 - 1 victory over Ayr Belleisle to ad a second League Championship triumph to their only other win back in 2001.
Former West Of Scotland Boys matchplay winner Euan Walker was first out for Barassie and quickly established a 3 hole lead by the 5th over fellow Ayrshire Boys squad member Ciar Porciani. Euan further increased his lead to 5 holes at the turn befire Ciar stemmed the tide a little but was powerless to stop a 5&4 defeat

Callum Gorrie increased barassie's advantage in the second tie, against Sean Thorburn, opening a two hole lead after five and increasing thise lead to four holes at the turn. Five holes down after the 12th, Sean clawed one hole back but eventually lost by 4&3.

In the third tie Euan Henderson was one hole ahead for barassie after five but then pulled away from jack McCluskey by taking thre of the next four holes for a four hole advantage at the turn. Euan maintained his lead throughout the inward half to win by 4&3.

In the fourth tie, Donald Swinley kept Belleisle's slim hopes alive with a run of five winning holes from six against Colin Currie as they turned for home, for a 5&3 victory.

With only a half over the remaining ties required by Kilmarnock (Barassie) for outright victory, it fell to Stuart Hope in the last tie on the course to record a 3&2 win over Bruce Rennie and secure the point needed to give Barassie a clear victory.

The 5th tie went all the way to the final green with Blair Gavin having established a two hole lead after 15 over Ross Cameron. Ross reduced the defecit by winning the 16th and a half at the penultimate hole took the tie to the last with Blair gavin holding the lead. Ross Cameron however found trouble from the final tee and the tie went to Blair gavin, and Kilmanrock (Barassie) by two holes, giving a final match score of Kilmanrock (Barassie) 5 Ayr Belleisle 1. 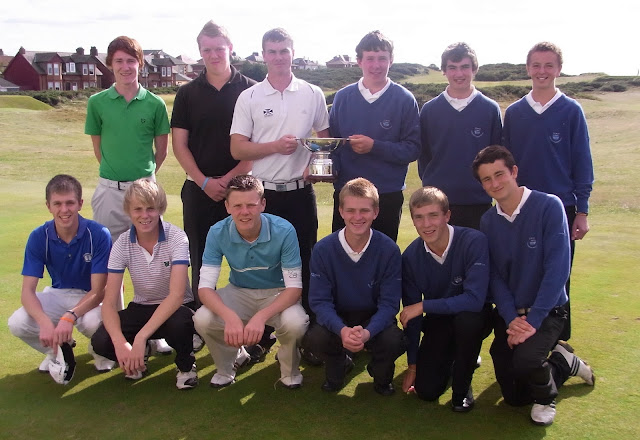 THE FINALISTS - Ayr Belleisle & Kilmarnock (Barassie)
At the presentations after the match AJGL Chairman John Nordbo (Largs) thanked Prestwick St. Nicolas for providing the use of the course at such short notice after the closure of Largs due to substantial storm damage on the Wednesday evening. He also congratulated all participants on reaching their respective finals.
The day had provided not only worthy winners but also gallant losers and the games had been played in a very friendly manner. Each final also attracted a number of supporters adding to the occasion.
On a final note it was observed that the Barassie team were all under 16 and could play as a team for the next two years so there is an challenge for other clubs in the coming years.
Posted by AJM at 12:45 am