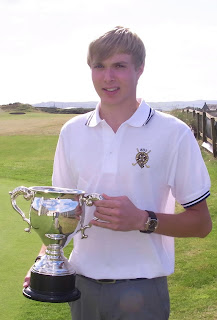 Craig Telfer (Prestwick St. Cuthbert) - pictured right -  is the new Ayrshire Junior Champion of Champions, winning the title with a 2 & 1 victory over Joseph Howie (Ardeer) 2&1 in a very competitive match at Prestwick St Nicholas on Sunday 26th September.
Joseph Howie took the lead at the first after Craig Telfer was in trouble from the tee on the right but Craig fought back to win the 3rd and square the match.
Joseph re-established his lead at the 4th, only to see Craig level the game once more at the fifth.
Craig went ahead in the match for the first time at the 7th but Joseph levelled the match once more as the players reached the turn.
It had been a hard fought game played in wonderful spirit and the following band of supporters found it hard to predict a winner at this stage.
In the second nine Craig began to make his longer hitting tell and eased into the lead at the10th, increasing it further at the 13th to two holes with a birdie at the long and testing par four.

As holes began to run out, Craig Telfer matched Joseph Howie's par figures over the closing holes to claim victory at the 17th by 2&1.

In an exciting match which could have gone either way, League Chairman John Nordbo (Largs) paid tribute to both players for their sportsmanship and conduct. 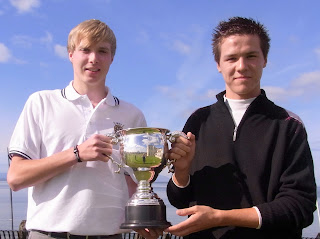