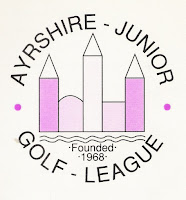 The draw for the last eight in the UNDER 16 KNOCKOUT TROPHY competition is:-

Ties must be completed by 5th August.

In the JUNIOR CHAMPION OF CHAMPIONS TROPHY competition, Callum Jurray (West Kilbride) booked the final place in the quarter finals with a 4 & 3 win at home to David Stark (Caprington) in the last second round tie to be played.

All ties must be completed by 5th August.

In the WALLACE THORNTON TROPHY competition, the draw for the quarter finals, played on a home and away basis, was determined following the results of the Ayrshire Junuior Team Championship at Skelmorlie recently.

The pairings for the quarter finals are:-

All ties to be completed by 5th August.

In the AYRSHIRE JUNIOR GOLF LEAGUE CHAMPIONSHIP competiton, the only match played to date, at Troon, resulted in a 3 - 3 draw between Troon Welbeck and Ballochmyle in Section A.
Posted by AJM at 1:07 am