AYRSHIRE CHAMPION OF CHAMPIONS - Denim and Sweeney through to quarter finals. 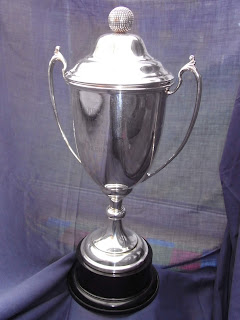 The line up for the first quarter final of the 2018 Ayrshire Champion Of Champions trophy competition is known, after the first of the third round matches were played this week.

Paul Denim (Loudoun) beat Ian Walker (Royal Troon) by 4&3 at Loudoun to secure a home tie in the last eight against Adam Sweeney (Largs Routenburn), who won through by 7&6 on his visit to play George Paton (Troon Merchants)

The remaining third round ties are due for completion by 17th June.
Posted by AJM at 12:11 am