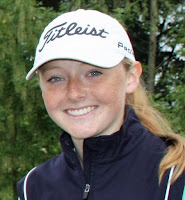 Scottish internationalist Louise Duncan from West Kilbride led the 16 qualifiers for the matchplay stages of the Scottish Woman's Championship at Gullane following completion of the two strokeplay qualifying rounds on Friday the 4th of June.

Duncan finished the two qualifying rounds with a 138 total, nine under par, to lead the qualifiers by a single shot from three others, including Irvine's Luisa Gibson who led the field following the morning round.

Rachel Foster (Prestwick St Nicholas) was one shot further back, on seven under par, whilst Hazel McGarvie (Royal Troon) also comfortably made the matchplay cut on four under par.

The cut for the match play stages fell at one under par with Freya Russell (Royal Troon) just missing out by a single shot.

The other Ayrshire players in the field, Emma Ritchie (Ladies Club, Troon) and Caitlyn Bilham (Irvine) finished on 12 and 27 over par respectively.

The matchplay stages tee off from 0815 on Saturday morning, the 5th of June.

Louise Duncan faces the 2015 winner Clara Young from North Berwick in the opening matchplay round whilst Luisa Gibson plays Katie Wright from Stranraer.

Ayrshire are assured at least one representative in the quarter finals as the first round of matchplay paired Hazel McGarvie and Rachel Foster.

The full draw for the first matchplay round is:-