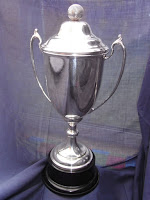 Three more players have won their first round matches and progressed to the last thirty two of the 2021 Ayrshire Champion of Champions Trophy competition.

Sean Hainey (Prestwick Centre) had a single hole victory over Kevin O'Neill (Alton) and now travels to face Scott Ainsworth at Ardeer in round two.

Andy Carroll (Drongan) was taken to the third extra hole by Callum Irving (Ayr Belleisle) before winning through to round two, where he will be at home to either Kevin Thomas (Troon Welbeck) or Connor Martin (Braehead).

Also through to round two, following an 8 & 7 win over Gordon Wilson (Troon Merchants), is David MacDonald (Largs), who will now visit Alasdair Berry (Irvine Ravenspark) or Stuart White (Girvan) in the last thirty two.