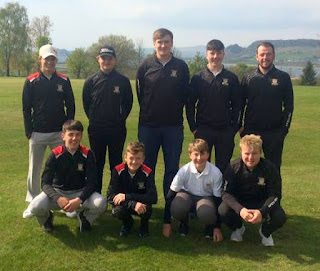 The Ayrshire Under 18 team suffered defeat in their opening match of the 2017 West Of Scotland Inter County Under 18 League on Sunday 30th April, going down by 5 - 3 away from home to Renfrewshire at Erskine.

The Ayrshire team lost all four of the opening under 16 ties and despite three wins in the under 18 ties, a heavy defeat for Ewan Milligan signalled defeat for the team overall.

Ayrshire's next match is on Sunday 11th June when they travel to meet Stirlingshire at Strathkendrick
Posted by AJM at 10:33 pm