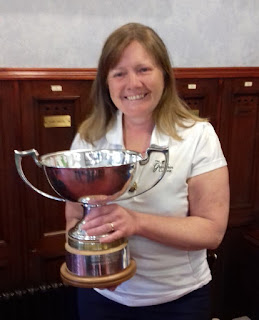 Ayrshire Ladies County Golf Association Captain Liz Keohone (Loudoun) made her final year in office all the more memorable on Wednesday 12th April when she won the Ayrshire ladies County Championship for the second time, following her inaugural win back in 2001.

In tough blustery conditions at Glasgow Gailes, the semi finals in the morning saw Liz overcome Pauline Patrick (Irvine) by 3 & 1.

In the other semi final the 1985 champion Jane Finnie (Troon Ladies) edged out Audrey Thomson (Loudoun) by a single hole after an exciting closing stretch which saw Jane hole her second shot at the sixteenth for an eagle two to go dormie two, before Audrey chipped and putted to win the seventeenth and take the tie to the last. At the final hole a par was good enough to book a place in the final for Jane Finnie.

In the final, Jane raced to a two hole lead after two and maintained her advantage through seven before Liz took successive holes at eight and nine to square the match at the turn.

A holed chip at the tenth put Liz ahead in the final for the first time but Jane hit back by winning three successive holes from the thirteenth to go two up with three to play. A half at the sixteenth left jane dormie two but par was good enough to win the seventeenth for Liz after a poor tee shot from Jane, and the match progressed to the final hole.

A great chip under pressure at the last ensured a win for Liz and the final went into extra holes.

Both players missed the green at the first play off hole in two but another good chip and putt from Liz was good enough to secure a winning par four and her second County Championship final, sixteen years after her maiden win at Prestwick St Nicholas.
Posted by AJM at 12:26 am