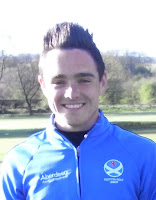 A former Scotland Under-18 international and now a second-year student at Western Kentucky University, Stuart  had rounds of 73, 70 and 79 for a total of nine-over-par 222 at a par-71 course of 6,925yd.

Easton had two birdies in his first round, three in his second round but only one, at the 18th hole, in his final round which cost him a top-10 finish.

But Ole Miss (862) had to settle for second place in the team event won by Lipscomb University (859) with Chattanooga (892) third and Western Kentucky (898) fourth in a field of 14 teams.

Report courtesy of the Cal Carson Golf Agency
Posted by AJM at 11:53 pm