Kilmarnock (Barassie) - pictured below - are the new Ayrshire Summer League Champions following a thrilling second leg victory over Irvine (Bogside) in the Final.
The Barassie Links course posted a formidable challenge in the testing windy conditions but it was the home side who eventually took the honours with a 3 ½ - 2 ½ win which gave an overall 6 ½ - 5 ½ result. 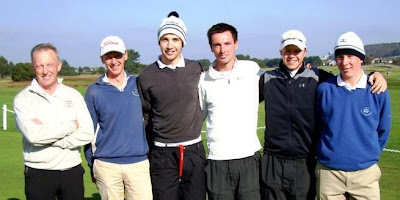 Stuart Miller gave the home team the perfect start by taking an early lead against Gareth Lamb in a rock solid display. Wins at 14 and 15 eventually sealed a fine 4 & 3 win. Jamie Mackay and John Shanks then lined up in what looked like the match of the day but Mackay took the first five holes in a one sided encounter and kept his 100% record in this year’s matches intact by recording a 5 & 4 victory.
As the Bogside fightback began, promising youngster Euan Walker ran up against some excellent golf from the visitor’s Alan Connery who built a commanding five hole lead by the seventh. Walker, aware of a possible count back situation, dug in before eventually succumbing on the 15th green. In match four, an out of sorts Andrew Wright gifted Colin Gray the first two holes of their match before fighting back to level the contest by the fifth. However, the Irvine player’s greater consistency in the tough conditions allowed him to ease away to a crucial 4 & 2 win.
This left the two deciding matches out on the course and home Club Captain David Miller played some fine golf in the anchor match to build an early lead against Gordon Dunlop. Miller, also mindful of the potential for a count back, used all of his matchplay experience to build on that lead and secure an important 5 & 4 victory for his team.
Up ahead, the match between Euan Brown and Stephen Spence was producing some quality golf. As the overall match developed it became clear this was likely to be the pivotal encounter and although Brown held a two hole lead with three to play, fine birdies from Spence at 16 and 17 saw the match head up the 18th hole. Both players found the green with their approach shots to set up birdie chances but when Spence’s effort slipped past, Brown nudged his tricky downhill putt to the hole side for the winning half point.