It was a case of third time lucky for the maybole pairing of David Wallace & Scott McCahill  when they triumphed in the final of the 2010 Ayrshire Fourball Championship at Kilmarnock (Barassie) on Sunday 10th October, beating the North Beach duo of Johnny O'Neill and Gary Ross.
For the Maybole pair, 2010 marked their third appearance in the final in the last four years but the title had eluded them on both the previous occasions they had appeared. 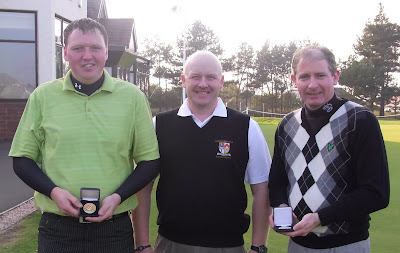 2010 Fourball Championship winners David Wallace & Scott McCahill
pictured with AGA President Alasdair Malcolm
It was the North Beach team who took the early lead, a par five at the opening hole being enough to edge in front. The next two holes were halved in par before the Maybole side levelled the match at the fourth with a winning par three. Birdies at the fifth and sixth were only enough for the sides to half each hole , as was par at the seventh.
The Maybole pair edged in front for the first time with a winning par five at the eighth and a par four at the ninth was sufficient to extend maybole's lead to two holes as the match turned for home.

A birdie three at the 10th hole increased the margin of the maybole lead to three holes and, despite the best efforts of the North Beach team to reduce the defecit, the following four holes were halved in pars or birdies to leave maybole three ahead with four holes remaining.

At the 15th hole, the North Beach team broke the deadlock, taking the hole with a par and reduce the defecit to two holes.

At the 16th, which proved to be the final hole of the match, Scott McCahill produced two superb shots to reach the 491 yard par 5 in two shots and two putts from the back of the green gave him a birdie four which, despite a valiant effort, the North Beach duo were not able to match and thus Scott McCahill and David Wallace of Maybole took the title with a 3&2 victory. 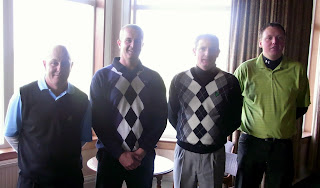 The 2010 Ayrshire Fourball Championship finalists
At the conclusion of the final, Ayrshire Golf Association President Alasdair Malcolm (Prestwick St Nicholas) made presentations to all four finalists.
Posted by AJM at 12:06 am