THE WALKER CUP - Euan Walker contributes 1.5 points from 4 but G.B & I lose out at Hoylake. 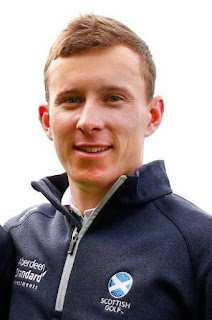 Euan Walker (Kilmarnock Barassie) contributed 1.5 points from a possible 4 to the Great britain & Ireland cause at the Walker Cup match, held at Royal Liverpool Golf Club, Hoylake, on Saturday 7th and Sunday 8th September, but the hosts eventually lost out to the holders USA by 15.5 - 10.5 in the biannual match.

On Saturday the morning foursomes were shared 2 - 2. Euan Walker was paired up with fellow Scot sandy Scott (Nairn) but lost by 2 &1 to John Pak (Scotch Plains) and isaiha Salinda (South San Francisco).

GB & I took five of the eight singles matches on Saturday to lead 7 - 5 overall, after day one, with Euan Walker beating Steven Fisk (Stockbridge) by 2 holes in his tie.

On Sunday morning Euan Walker again teamed up with Sandy Scott and earned a half point with a tied match against Andy Ogletree (Little Rock) and John Augenstein (Owensboro), as the USA reduced the deficit to 8.5 - 7.5 by taking the morning foursomes matches 2.5 - 1.5.

In the ten singles on Sunday afternoon, the USA team stormed to victory, winning eight of the ten ties to retain the trophy with a five point winning margin. In his final singles tie, Euan Walker lost to John Pak (Little Rock) by 2 & 1.
Posted by AJM at 12:25 pm