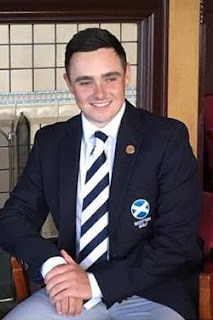 Stuart Easton (Irvine GC) made a major contribution as Scotland just failed to win the Home Internationals in a final match showdown with England at Lahinch GC in Ireland, which was played from 11th to 13th September.

Scotland opened on day one with an 8.5 – 6.5 win over the hosts, Ireland, with Stuart Easton teaming up with Lewis Irvine in the foursomes to secure a half match with Colin Canmpbell & Tom McKibbin before Easton then secured a further half point against Tarnan McLarnon in the afternoon singles.

On day two against Wales, Easton and Irvine were again paired together in the foursomes and  beat Connor Jones & George Bryant by 2 & 1. In the afternoon singles, playing in the anchor tie, Stuart Easton had a single hole victory over Gaelen Trew as Scotland ran out winners by 9.5 – 5.5.
On the final day Scotland faced England, who were also unbeaten, in a winner takes all showdown for the 2019 Home Internationals title.

Stuart Easton and Lewis Irvine secured another half point together, in their morning foursomes tie against bailey Gill & Joshua McMahon, to remain unbeaten in their three outings together as the morning foursomes were shared 2.5 – 2.5 but in the afternoon singles England powered to a 9 – 6 victory overall, with Stuart Easton suffering his only defeat of the week, going down 3&2 to bailey Gill in the anchor tie, as England won the series leaving Scotland in second place, ahead of Ireland and Wales.