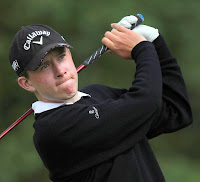 Euan Walker (Kilmarnock Barassie) has been recognised for his outstanding season by being named as one of two Scots in the Great Britain & Ireland team who will contest the Walker Cup against The USA at Royal Liverpool Golf Club (Hoylake) from 7th to 8th September.

The other Scot in the young G.B. & I. team this year is Sandy Scott |(Nairn) where the age range of the team members ranges from sixteen to twenty six.

Euan Walker will be tenth Ayrshire player and the fourth Kilmarnock (Barassie) member to contest the Walker Cup, following Jim Milligan (1989 & 1991), Gordon Sherry (1995) and Jack McDonald (2015) , and will be hoping to continue the success enjoyed by his predecessors.