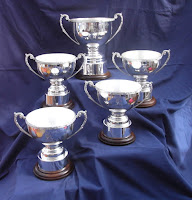 All the Ayrshire Scratch League Championship winners were confirmed this week, along with the relegation and play off places, as all bar one of the seasons fixtures were completed.

In DIVISION 1, the outstanding fixture between Turnberry and Prestwick St Cuthbert has been rescheduled for September, but does not affect the league placings

In DIVISION 2, Ballochmyle have been confirmed as champions. Caprington needed to win their final home match against Ayr Belleisle by 6 – 0 to prevent Ballochmyle winning the title, but they could only manage a 4.5 – 1.5 win which meant that Ballochmyle remained on top by the narrowest of margins.

Defeat in their final fixture also meant that Ayr Belleisle face a play off to retain their Division 2 status.

Final positions in Division 2 are:-

In DIVISION 3, Royal Troon were confirmed as league Champions after Troon St Meddans lost their final match at West Kilbride by 4.5 – 1.5.

Final positions in Division 3 are:-

Final positions in Division 4 are:-

With all the leagues now effectively concluded, the Championship, relecgation and play off positions have been confirmed as follows:-

The home and away play off matches are due to be concluded by Saturday 14th September.