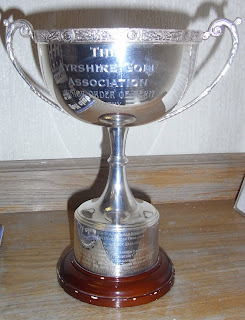 With nine events remaining to be played, and the results of one more still to be confirmed, the chase for the 2019 Ayrshire Junior Order of Merit title is well under way.

At the Byrne Howard Junior Open at Royal Troon at the end of June, Freya Russell (Royal Troon) created a bit of history by becoming the first girl to take top points from a counting event after returning a scratch score of 74, which matched the CSS, against the best return from a boy, by Alyx Murray (Prestwick St Nicholas) of 75 which was two above the boys CSS.

At the Scottish Boys Championship, Ruben Lindsay (Ayr Belleisle) secured maximum points with his championship win and moved straight up to third place in the Order of Merit table whilst Freya Russell and Rachel Foster (Prestwick St Nicholas) gained points in the Scottish Girls Championship for their semi final appearances, Russell moving into fourth place in the table as a result.

With his two first places Patrick Smiley lies in second place, just behind Ross McDonald (Kilmanrock Barassie) who leads  courtesy of a consistent number of good finishes, including second place at West Kilbride and joint second at the recent Ayrshire Boys Championship.

The results are still awaited for the Tom Lehman Junior Open at the Troon Municipal courses, played on 30th July, whilst the next counting events are the Turnberry Junior Open on Monday 5th August, The Ayr Belleisle Junior Open on Thursday 8th August and the Prestwick Junior Open on Friday 9th August.

The present positions in the Ayrshire Junior Order of Merit are:-