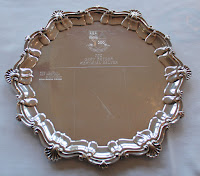 Three more clubs have booked their places in the quarter final line up in the scratch club team knockout competition for the Gary Bryden Memorial salver, alongside Kilmarnock Barassie and Irvine.

With Kilmarnock Barassie and Irvine already through to play each other in the last eight, they were soon joined by Troon Welbeck who won 3 - 0 away to Rowallan Castle and who now have a home tie against Caprington in the last eight, as the latter was awarded their second round tie by Prestwick St Nicholas.

The other tie played recently saw defending champions Royal Troon gain a good 2 - 1 win away to Ballochmyle and they are rewarded with a home tie in the quarter finals against either Girvan or Largs.

The remaining three second round ties are due to be completed by 28th July 2019
Posted by AJM at 1:12 am