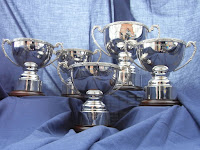 Division 3 in the Ayrshire Scratch leagues has been reduced to five clubs following the withdrawal of Largs Routenburn from the competition.

Routenburn were unable to field a team for two fixtures recently and the concession of the two matches, under the rules, resulted in the withdrawal of the team from the league, with all previous match results involving the club being voided.

Although Troon St Meddans have a comfortable lead in the division their recent 5 – 1 defeat away to Royal Troon dented their title hopes whilst boosting the hopes of a second successive title for Royal Troon.

Present positions in DIVISION 3 are:-

In DIVISION 1, Prestwick St Cuthbert’s hopes of a fourth successive title are hanging by a thread following their latest heavy defeat, by 5 – 1, at Irvine.

With Turnberry losing 4 – 2 at Loudoun and recording a victory by the same score at home to Kilmarnock Barassie recently, division one remains tight with a few fixtures still remaining to be played.

In DIVISION 2, Caprington kept their hopes on track with a 4 – 2 win at home to Ballochmyle who spurned the chance to go to the top of the table.

The positions in DIVISION 4 remain the same, the present placings being:-