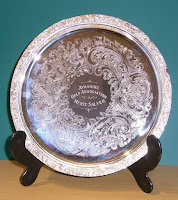 Michael Smyth (Royal Troon) has taken an early lead in the chase for the Doc Thom Salver and 2019 Ayrshire Order of Merit title.

Following on from his wins in the Ayrshire Styrokeplay and Ayrshire Matchplay events recently, Sunday's Hillhouse Cup at Royal Troon saw him share top points with Darren Mallinson (irvine) after both players hade returned rounds of 71, just ahead of Sean Addie (Ayr Belleisle) who scored his first order of merit points of the seeason with his third place finish.

Present positions in the Ayrshire Order of Merit are:-


The next three counting events, which all take place on Sunday 26th May are The Stevenson Trophy at Girvan, The West Kilbride Mens Open at West Kilbride and the West Of Scotland Strokeplay Championship at East Kilbride.
Posted by AJM at 12:12 am