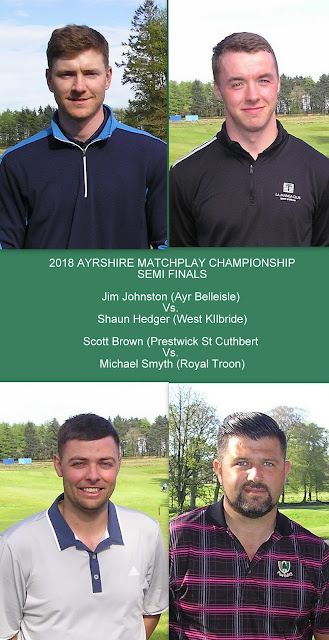 The semi final line up for the 2018 Ayrshire Matchplay Championship was confirmed on Tuesday evening when the four quarter final matches were played at Rowallan Castle Golf Club.

Johnston established a quick two hole lead in the tie with a par at the opening hole followed by a birdie two at the second, and was never behind in the tie. The players matched each other until the sixth where a par four was enough to extend Johnston's lead to three holes. A winning par three at the eighth put Johnston four up by the turn and  he extended his lead to five holes with another winning par three at the tenth, before brown staged a mini comeback, taking the eleventh and twelfth with a par and a birdie to reduce the match score to three holes in Johnston's favour.

The comeback was halted at the thirteenth where Johnston had a birdie four to go four ahead once more, and the match was closed out two holes later by 4&3.

In a strong performance, Johnston covered the holes played in one over par.

In the semi finals on Wednesday night, Jim Johnston will face Shaun Hedger (West Kilbride) who booked his place in the last four with a 5&3 win over Sandy Walker (Kilmarnock Barassie).

Sandy Walker took an early lead in the tie at the third with a birdie four after the opening two holes had been halved in pars but a par three at the fifth was good enough for hedger to square the tie. The next three holes were also halved in par figures before Hedger went ahead for the first time at the ninth when Walker lost a ball and conceded the hole.

Walker extended his lead to two holes with a winning par three at the tenth and quickly went four ahead with successive birdies at the twelfth and thirteenth holes, before closing out the match on the fifteenth green with a winning par four for a 5&3 victory.

In the bottom half of the draw, 2009 winner Scott Brown (Prestwick St Cuthbert) progressed from a tight match with a 2&1 victory over Robbie Muir (Kilmarnock Barassie).

Brown won the first hole with a par four and maintained his advantage until the sixth where MuIr birdied the hole to square the match.

A par three at the eighth was good enough for Muir to take the lead for the first time, only for Brown to win the ninth with a par five to square the match at the turn.

A birdie four at the thirteenth by Brown restored his one hole advantage but again Muir squared the match with a birdie three at the fourteenth.

The match turned in Brown's favour at the testing par five sixteenth where his bogey six was good enough to take the hole and give him a slender lead with two holes to play, and he followed that with a winning par three at the seventeenth to take the tie 2&1.

In Wednesday's semi finals brown will be up against three time winner Michael Smyth (Royal Troon) following his crushing victory over William Fleming (Ballochmyle) in the quarter finals.

Smyth took a two hole lead after three in Tuesday night's tie after Fleming lost a ball at the short second hole and Smyth had a birdie four at the third, and the two hole advantage was maintained through six holes before successive bogeys at the seventh and eighth by Fleming allowed Smyth to double his leading margin to four holes. A half in pars at the ninth maintained Smyth's four hole lead through the turn.

Smyth went a further two holes ahead immediately after the players turned for home when Fleming had successive bogeys at the tenth and eleventh and a further lost ball by Fleming at the thirteenth hole prompted a concession of the hole, and the match, to Smyth by a 7&5 winning margin.