AYRSHIRE MATCHPLAY CHAMPIONSHIP - Round one results from Rowallan Castle 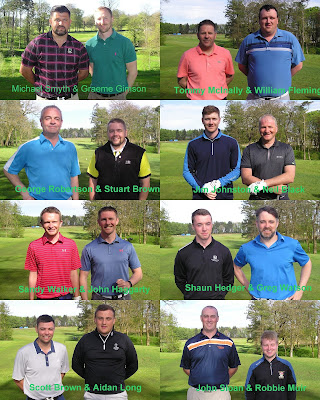 The first round of the 2018 Ayrshire Matchplay Championship was completed on a fine sunny evening at Rowallan Castle Golf Club  on Monday 7th May.

In the first match on the course, former champion Michael Smyth (Royal Troon) faced Graeme Gimson (Prestwick St Cuthbert) and it was Smyth who prevailed in the tie, winning a place in round two with a 4&3 victory.

In the second round on Tuesday evening Smyth will play William Fleming (Ballochmyle) who was taken to the final hole by another former champion, Tommy McInally (Loudoun), before winning through to round two with a single hole victory.

Of the four players from his home club who qualified this year, only Stuart Brown (Loudoun) secured a second round spot with a win against George Robertson (Irvine). Robertson took an early lead, being two up after four holes but Brown won the fifth and squared the match at the sixth when Robertson three putted. Brown also took the eight and ninth, again after a three putt by Robertson at the last hole of the outward half, to take a two hole lead at the turn. The players exchanged holes in the inward nine before Brown closed the match out by 3&2.

In the second round, Brown will be up against the new Ayrshire Strokeplay Champion Jim Johnston (Ayr Belleisle) who became the first strokeplay winner for a number of years to safely negotiate the first round of the matchplay by beating Neil Black (Rowallan Castle) by 6&4.

Sandy Walker (Kilmarnock Barassie) will play Shaun Hedger (West Kilbride) in Tuesday's second round after both players prevailed in the opening round by 3&2 against two Loudoun players, Walker beating John Haggarty and Hedger defeating Greg Watson.

2009 winner Scott Brown (Prestwick St Cuthbert) had a hard fought match with Aidan Long (Ayr Belleisle) before he won through to the second round with a two hole victory.

With ties after the regulation 18 holes to be decided onver Rowallan Castle's famed 19th hole, only one of the first round matches reached that stage, when Robbie Muir (Kilmarnock Barassie) and John Sloan (Doon Valley) remained tied after 18 holes.

With Muir to play first, he piled the pressure on with a superb tee shot to within five feet of the pin at the nineteenth hole. John Sloan's effort found a bunker to the left of the green and when he failed to get up and down from the sand, the tie was conceded to Muir, who progressed to play Scott Brown on Tuesday evening in the second round.

The second round matches are scheduled to take place at Rowallan Castle GC on Tuesday, with the semi finals on Wednesday and the final on Thursday.