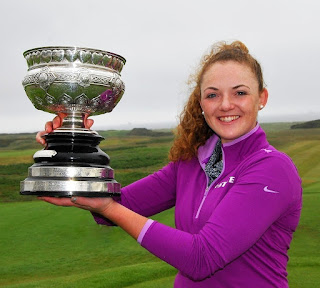 The following report is reproduced courtesy of Colin Farquharson.

Connie Jaffrey (Troon Ladies) from Kilwinning is the new queen of Scottish women's amateur golf.
In an absorbing battle between two 20-year-olds who are students at American universities, she beat Clara Young (North Berwick) by two holes in an exciting climax to the 103rd national championship at Royal Aberdeen Golf Club where the rain, which has dogged the event all week, returned for the final over the Balgownie links.

Kansas State University student Jaffrey used a brilliant short game - single putts on the first four greens and six one-putt greens on the outward half - to surge five up at the turn, having gone out in four under par with birdies at the first, fourth, sixth and ninth.

Young, not at her best, did not win a hole until the 11th but it triggered off a two-under-par run which saw her also win the 12th, 13th, 14th and 15th - five in a row, a magnificent fightback by the University of Missouri student from North Berwick which saw her square the match on the 15th green.

Sadly, into the wind and rain, Clara's rally petered out. She bogeyed the 16th to go one down again and then was plugged in the thick and wet rough with her second shot at the 18th, moving the ball only a few feet, and eventually conceded Jaffrey a 10ft birdie putt to go down by two holes.

Young was an approximate one over par for the round which was her third appearance in the Scottish final. She lost to Alyson McKechin in 2013 but won the title at Monifieth in 2015.

Among the spectators at the final was Elaine Farquharson-Black the GB and Ireland team captain who lost to Janice Moodie in the final when the championship was last played at Royal Aberdeen in the early 1990s. She had won the title at year or two earlier at Machrihanish.

Connie Jaffrey's win in the 2017 Scottish Championship brings the trophy back to Ayrshire for the first time since Alison Gemmill won on her home course at Kilmarnock Barassie for her second title, having had previous success three years earlier at Stranraer.

Ayrshire winners of the title since it's inception in 1903 are :-