Sandy Walker (Ardeer) had a notable win in the first round of the 2015 Ayrshire Matchplay Championship on Monday 4th May at Prestwick St Cuthbert GC when he defeated 2015 Strokeplay Champion Tommy McInally (Loudoun) on the final green of a very tight match.

There was never much in the tie throughout and a birdie three by Walker on the sixteenth put him one ahead with two to play. McInally looked favourite to take the seventeenth but Walker produced a superb put for a par three to half the hole and closed out the match with a par at the last for a one hole victory.

In the quarter finals on Tuesday evening walker will face Stuart Miller (Kilmarnock Barassie) who defeated host club player Greg Telfer (Prestwick St Cuthbert) by 2 & 1 in the first round.

Euan Brown (Kilmarnock Barassie) came in as a late replacement for Malcolm Pennycott (Whiting Bay) who withdrew dew to illness, and Brown grabbed his chance with a 4 & 3 win over Scott Brown (Turnberry) to book a quarter final place.

In the last eight, Euan Brown will play Steven Stamper (Turnberry) who edged out his clubmate Scott McCahill by one hole on the final green.

Host club hopes for the title are in the hands of Stuart Robin (Prestwick St Cuthbert) who beat Barrie McDonnell (Caprington) by 2 & 1 to go through to Tuesday nights quarter finals, where he will play 2013 champion Michael Smyth (Royal Troon) who edged out the current title holder Craig Hamilton (Ballochmyle) by one hole.

John Shanks (Irvine) maintained his hopes of one of the county titles which has so far eluded him with a 3 & 2 win over Paul Denim (Loudoun), and now plays John Haggarty (Loudoun) in the quarter finals after Haggarty ended the hopes of the 2014 runner up Steven Wallace (Prestwick St Cuthbert) at the 20th hole of their tie.

The line up for the quarter final matches on Tuesday evening is :- 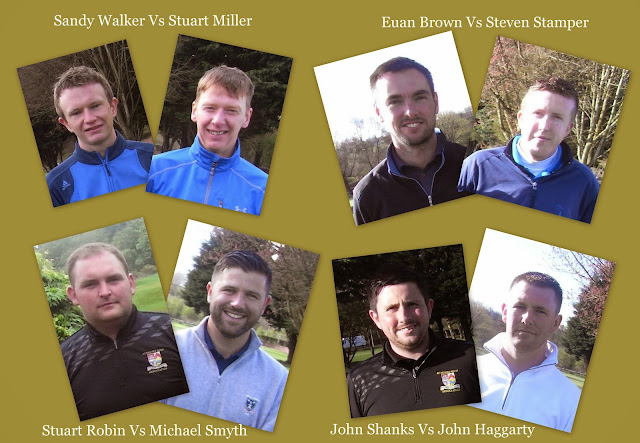