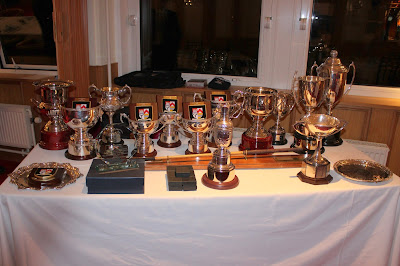 An enjoyable evening was had by all at Prestwick St Cuthbert Golf Club on Friday 15th February when the Ayrshire Golf Association Annual Dinner and Presentation of Prizes took place.

The evening was chaired by Ayrshire Golf Association President John Watt, a member of the host club, and the company included the Scottish Golf President June McEwan, guest speaker Alan Tait, guests from fellow West Of Scotland Area Associations as well as prizewinners and representatives from member clubs.

After President watt welcomed the company on behalf of Prestwick St Cuthbert GC,, the assembly enjoyed an excellent meal before moving on to the first presentations of the evening.

Following the President's review of the year there was a short interval followed by a lucky programme draw for golf related prizes which led on to the first presentations of the evening.

in 2018 Ayrshire won the West Of Scotland inter county under 18 league for only the second time, some 22 years after their previous success and in recognition of the achievement the victorious squad members were invited to the dinner.

Squad members Sean Addie, Ruben Lindsay, John Lomas, Jack Allan, Josh Davies, Ben Fleming and Cameron Johnston and Past President Milton Murray who assisted with the team, were not present but will receive their commemorative medals in due course.


The first presentations were followed by an excellent speech from Guest Speaker Alan Tait, who hailed from Ayrshire, having learned his golf over the Irvine GC links at Bogside where he is an Honorary Member in recognition of his achievements in the amateur game, before he embarked on a career in professional golf.


The company were engaged throughout Alan's presentation during which  he related some very entertaining tales from his years playing professional golf throughout Scotland and beyond.

Folowing a short interval, the programme continued with five special presentations to Ayrshire's international representatives during the 2018 season. Jack Broun was present to receive his memento from President Watt to mark his selection for the Boys Home Internationals at Royal Dornoch and European Boys Team Championship in the Czech Republic in 2018.

Jim Johnston and Euan Walker could not be present as they were in South Africa with a Scotland squad, Stuart Easton was absent as he is at university in America whilst boys internationalist Ruben Lindsay was absent as he was in Cyprus with a Scotland junior squad. Their awards were received on their behalf by AGA Honorary Life President Iain Harvey, Kilmarnock Barassie Captain Graeme Love, AGA Past President John Rushbury and AGA Vice President Scott Gilchrist respectively.

The evening moved towards a conclusion with the presentation of the annual trophies won in 2018. President John Watt, assisted by Scottish Golf President June McEwan, presented the annual awards.


David & George McCulloch of Brunston Castle GC were present to receive the Ayrshire Fourball Trophy which they won for the fourth time in eight years, and they also received the President's Putter which was won by the club in 2018 also.


Michael Smyth of Royal Troon was prsent to accept the Ayrshire Matchplay Trophy which he won for the fourth time in 2018, when the event was held at Rowallan Castle GC. With Jim Johnston not present, AGA Honorary Life President Iain Harvey collected the Ayrshire Strokeplay Trophy on his behalf, and also collected the Doc Thom salver for him, as the winner of the Ayrshire Order Of Merit.

The remaining trophy presented was the Champion Of Champions Trophy which was collected by the 2018 champion Paul Denim of Loudoun Gowf Club.

The evening ended with AGA Vice President proposing a vote of thanks to all who had contributed to a successful evening, and he concluded by wishing everyone an enjoyable and successful year in 2019.