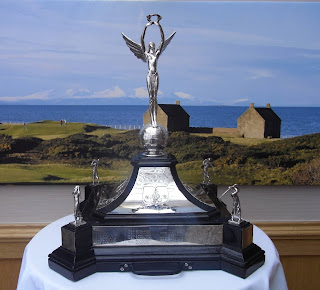 Scotland and Wales will battle it out for the wooden spoon on the final day of the 2018 Men's Home Internationals at Conwyn Golf Club, Wales, after both teams were defeated on the opening two days of the series.

On Wednesday, 12th September, Scotland were crushed 11.5 - 3.5 by Ireland whilst Wales suffered defeat to England by the same margin.

In the morning foursomes Ayrshire's Jim Johnston (Ayr Belleisle) made his international debut in a foursomes pairing with James Wilson  but lost out by 3&2 to Caolan Rafferty & Alex Gleeson whilst Euan Walker (Kilmarnock Barassie) and fellow Ayrshire player Stuart Easton (Irvine) were out of sorts in their foursomes match, going down by 5&3 to Conor Purcell & Mark Power.

In the afternoon singles Walker had four successive birdies from the eleventh on his way to a 4&3 win over Mark Power whilst Easton was unlucky to lose by one hole to James Surgue, who produced four birdies in the inward nine for victory.

Jim Johnston recorded his first positive international result, winning the final hole of his tie with Peter O'Keefe to secure a half match.

On Thursday 13th September Wales were defeated 9.5 - 5.5 by irealand whilst Scotland had a very close match with England before going down by 8 - 7.

In the morning foursomes Jim Johnston & James Wilson teamed up again but were defeated by a single home by Ben Jones & Jake Burnage, whilst Euan Walker and Stuart Easton produced a much more positive performance against Bailey Gill & Nick Poppleton, with an eagle three at the fourteenth to go two up being the pivotal moment on the way to a 2&1 win.

In the afternoon singles Euan Walker was dormie two and produced a birdie three at the seventeenth to secure a 3&1 win in his tie against Tom Sloman but Stuart Easton was on the wrong end of a seven birdie round by David Hague to go down by 4&3 whilst Jim Johnston also lost by 4&3 to Tom Plumb, who finished the match with successive birdies at the fourteenth and fifteenth.
Posted by AJM at 9:57 am