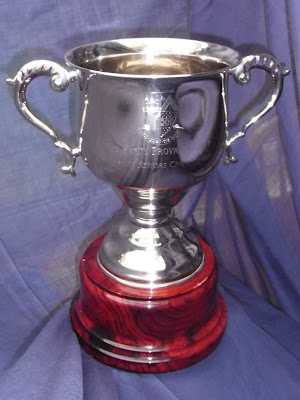 The 2018 competition attracted a superb field of 84 players and it was Paterson who led from the front, playing in the opening game of the day as he was flying out on holiday later in the day, and scoring a scratch 72 less his 12 handicap for an outstanding nett score of 60 which ultimately took the Sandy Provan Trophy by four clear shots.

Paterson's nearest challenger was 12 handicapper James Boyd (Caprington) who posted a nett 64 to take first place in the 60-69 age group.

James McIntyre (Moorpark) was best in the 50 - 59 age group with a nett 66 whilst Tom Denham (Annanhill) took first place in the 70+ age category, his net 71 winning on the better inward half from his clubmate Neil Black.

Iain McCall (Prestwick St Nicvholas) had the best scratch score of the day with a two over par 70.

There were at least two close calls for holes in one during the event, Iain McCall winning the nearst the hole prize at the second with a distance of 3 1/2 inches, whilst Bob Cameron (Ayr Belleisle) won the prize at the eighteenth hole with a measurement of 2 inches.

Though the trophy winner was flying off on holiday and was not present for the presentation, there were a good number of prizewinners present at the close of the competition who were presented with their prize vouchers by Ayrshire Golf Association President John Rushbury.

The principal prizewinners were:-