AYRSHIRE JUNIOR GOLF LEAGUE - Draws made for the 2021 competitions 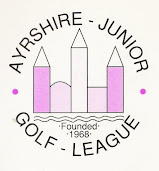 The draws have been made for the 2021 Ayrshire Junior Golf League competitions, as hopes are high that the 2021 events can be completed successfully, after the cancellation of all competitions last year.

In the AYRSHIRE JUNIOR GOLF LEAGUE CHAMPIONSHIP the seven competing teams have been drawn into two sections, with the section winners due to meet in te final of the competition in September at Irvine GC.

In the CHAMPION OF CHAMPIONS TROPHY competition, there are four first round ties which are due to be completed by the 30th of June:-

The draw for the subsequent quarter finals is:-

In the UNDER 16 KNOCKOUT COMPETITION there is one preliminary tie between Caprington and Turnberry before the quarter final matches commence, with all ties due to be played by 31st of May 2021.

The quarter final draw is:-

Caprington or Turnberry Vs West Kilbride

In the WALLACE THORNTON TROPHY, Irvine have received a bye into the semi finals, with the other quarter final ties due to be played by the 30th of June. The full quarter final draw is:-