The semi final line up for the 2017 Ayrshire Champion Of Champions Trophy competition has been confirmed following completion of the two outstanding quarter final matches this week.

The semi final matches will be played at Royal Troon on Friday 4th August at 5.00 p.m., with the final taking place at the same time and venue a week later, on Friday 11th August. 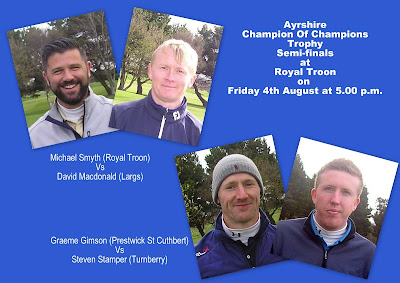 The first semi final will feature Michael Smyth (Royal Troon) and David Macdonald (Largs). David Macdonald booked his place in the last four with a 5 & 4 home win over Robert Adams Abbotsford) in the quarter finals.