Entries for three of the premier Ayrshire Golf Association events in 2012 must be in the habnds of The Secretary by Tuesday 31st January at the latest.

The Scratch (Summer) Leagues are contested throughout the summer with teams representing competing clubs playing in five leagues. 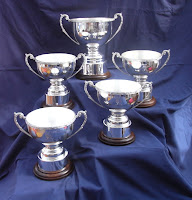 Of last years participants, entries are still awaited from

With 48 competitors in last years event, a number of participant clubs in 2011 have not submitted a representative so far for this seasons event.

35 couples have been entered so far in the Ayrshire Fourball Championship, up to and including entries received by 22nd January.

Played on a handicap basis throughout the season, the entries received by 14 January are :-

43 clubs entered the event last year, so again some of the participants from 2011 still need to submit their entry for the 2012 event.


Any club still wishing to enter any of the three competitions should forward completed entry forms to the Ayrshire Golf Association Secretary, along with the relevant fees, as soon as possible.
The Secretary's of all member clubs were circulated with the entry forms, via email, on 1st November 2011.

Should any club require a further copy of the relevant entry form, this can be obtained by contacting the AGA Secretary at ayrshiregolf@fsmail.net
Posted by AJM at 12:21 am