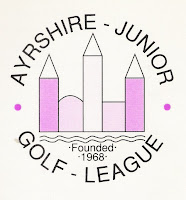 The decision, which received support from both the Ayrshire Ladies County Golf Association and the Ayrshire Golf Association, will allow girls to be included in teams in the League Championship, Under 16 Knockout and Wallace Thornton competitions, and may also result in a girls representative taking part in the Junior Champion Of Champions competition. This will be the first occassion since the Ayrshire Junior Golf League was formed in 1968 that girls will be eligible to take part in the competitions administered by The League.

A sub committee has been set up to consider relevant alterations to the Constitution and Rules Of Competitions, to be ratified by the member clubs prior to the start of the 2012 competitions.

Members present at the AGM also heard a resume of the 2011 season, including the very succesful annual dinner held at Loudoun GC.

With the League's finances in a healthy position, it was agreed to hold the annual subscription at the same level as 2011, whilst it was also agreed to write to clubs with junior sections who were not presently members of The League, to ascertain if there would be any interest in joining the AJGL prior to the 2012 season.

The 2011 Chairman, Gavin Scott (Loudoun) stood down at the meeting, handing over the position in 2012 to Bobby Caddis (Prestwick St Cuthbert). The Vice Chairmanship will be held by Annanhll GC in 2012 whilst The League officials remained in post for a further year, Robin Baker (Royal Troon) remaining as Treasurer, Billy Tait (Annanhill) retaining his post as Assistant Secretary and John Nordbo (Largs) filling the position of League Secretary.

At the conclusion of the evening, outgoing Chairman Gavin Scott had the very pleasant duty of proposing two of the club representatives for Honorary Membership of The League, on account of both individuals having served as their respective club convenors for periods in excess of 10 years.


The full list of individuals honoured in this way by The League is :-