FLASHBACK !!! - Ayrshire's West Of Scotland Under 18 League winning team of 1996

A blast for the past which came to light a few days ago. The scene is Beith Golf Club in September 1996 where the Ayrshire Under 18 team have just won their final match of the series to take the West Inter County League Wishart Trophy for the first time. 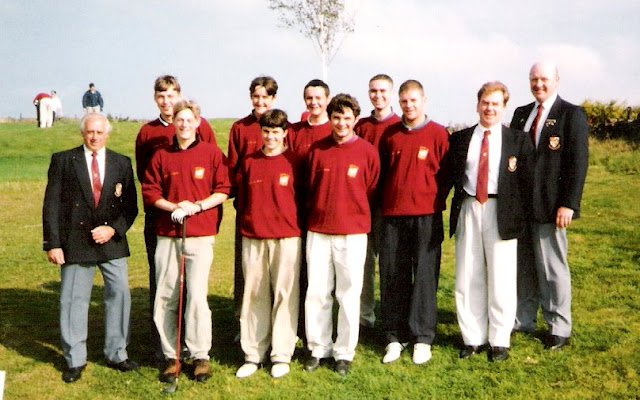 How many of the players and officials can you name ?.
There are at least four serving or one time professional golfers in the photo (Clue - It's not the three with the blazers at either side !!), as well as three players who went on to win senior County titles.

Another photo of the team from the same year, with one change of team member on this occassion

Can you name them all this time 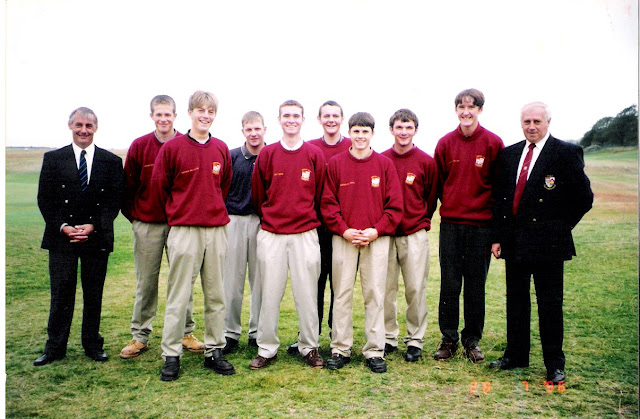 If anyone can name all the players and officials and wants to send their list to ayrshiregolf@fsmail.net we will publish the name of the sender of the first all correct list, along with the names of course.

Ian Fraser (Troon St Meddans) was able to name some of the players and officials in the photos.

"What a fantastic article in scottishgolf view about C.Gibson of St. Cuthbert. its so warming to know an ayrshire legend is finally recognised in the history books.

Also in those old pictures was the great JB Stevenson of Troon. What an incredible player he was!

He was our towns Bobby Jones. I think I'm right in saying he was a finalist in the amateur, representing scotland for many years and locally winning the Hillhouse Cup a staggering 10 times!( amongst many others things). (NOTE :- JB Stevenson was a Scottish internationalist in various years from 1932 through to 1951, bronze medalist in the Scottish Amateur in 1931 at Prestwick and quarter finalist in the Amateur Championship at Troon in 1938).

When you hear Professor Sir James Armour and Stewart Wilson saying he was their hero, you know he must have been something else!

It was also nice to see the Ayrshire boys team of the late 90s on the Ayrshire site. I can't name them all but definitely recognised Ronnie Potts, Dave Smith, big Scotty Cairns,Tommy Mac, Stevie Wallace and last but not least Neil Lockie.

Neil is a good friend of my mine. In case your not aware he is currently the head professional at Jonathans Landing GC in Jupiter, FLA.

I was out there in April and played the Fazio with him. Neil, of course is the great nephew of the great JB Stevenson ".

But the first person to name all the players and officials in the two photos of the Ayrshire Boys team was
STEPHEN McBLAIN
of Prestwick St Cuthbert GC.
Stephen correctly listed the names as :-
Photo 1 Left to Right


Well done Stephen - keep an eye out throughout the forthcoming year for other old photos, if we can dig some out, to test your memory.
Posted by AJM at 1:06 am