The course proved a stern test for the 53 competitors who took part, but it was a fine scratch score of 76, less his handicap of five, that gave Mckenzie a nett 71 and the title by a single stroke from Jim Ryan (Ayr Dalmilling).

Jim Ryan had the consolation of winning the 63 – 69 age group category whilst host club members David Brown and Epharim Spence were best in the 55 – 62 and over 70 age categories respectively with nett scores of 74 and 79.

The best scratch score of the day was returned by one handicapper Henry Thomson (Irvine) with a four over par 75.

The CSS for the competition rose to 74 (+3) reduction only.

Ayrshire Golf Association Past President Ricky Magee presented vouchers to the prize winners at the conclusion of the event and handed the trophy to the 2015 Ayrshire Seniors Champion, Iain McKenzie.

The Championship prize winners were :- 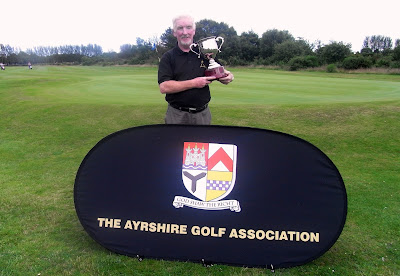