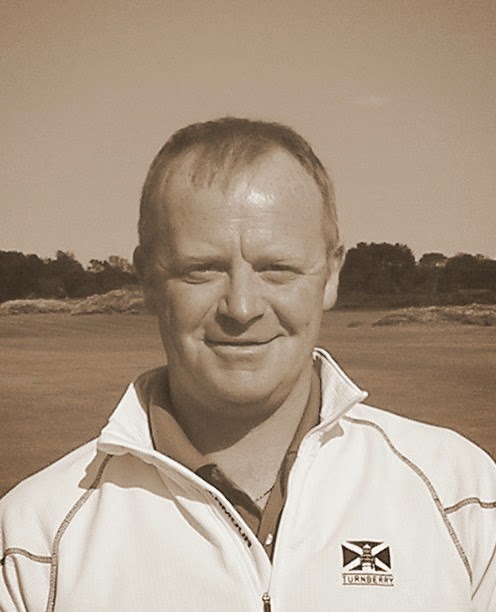 Just two days into 2015, Ayrshire golf is in mourning following the sad news of the death of Champion Of Champions title holder Gary Bryden at the young age of 44.


Gary won the Champion Of Champions title for the first time just four months ago at Royal Troon and his passing has stunned his friends and many golfing associates both in Ayrshire and beyond.
A native of Girvan, Gary spent his working life as a greenkeeper at Turnberry, and represented Turnberry, Girvan and Troon Welbeck over the years in many competitions, enjoying success in many local events.
As well as winning the Champion Of Champions title in 2014, Gary was also Ayrshire Strokeplay Champion back in 2001 and was in the Girvan team who won the Ayrshire Club Championship title in 2012 as well as leading the club to three successive league titles in the Ayrshire Scratch leagues from 2011 to 2013, in their climb from Division 5 to Division 2.
A great team player and one of  the true gentlemen of Ayrshire golf, Gary was a regular in the Ayrshire team for many years and his presence in the team room will be sorely missed by team mates and officials alike, as we move towards the 2015 season.
Everyone involved in the Ayrshire Golf Association would like to express sincere condolences to all Gary’s family and close friends at this desperately sad time.
Funeral arrangements will be intimated here when details become known.
Posted by AJM at 10:51 am

I'm saddened to hear of the passing of my friend Gary who was the nicest guy you could ever meet and a terrific golfer.

I am saddened to hear of the passing of my friend Gary . He was the nicest guy you could ever meet as well as a terrific golfer.

Very saddened to hear of Gary's passing. A real loss to Ayrshire golf at the age of only 44. A truly nice and modest person.

I have known Gary since he played in the Girvan Academy school golf team at 13 years of age. It was always a pleasure to play with him and to meet him when he was working on The Ailsa course. He was a very talented golfer and a gentlemen both off and on the course.

Very sad to hear of his passing.

I have just read the sad news of the the sudden death of Gary Bryden.Gary was a true gentleman and a great golfer who was always there when you needed him He will sadly miss

Shocked to hear of Gary's sudden passing. Always smiling, a great talent taken at too young an age. RIP