The 2021 Ayrshire Fourball Champions are the Prestwick Centre GC due of Aidan Long and John Tanner, who won the trophy in extra holes during finals day at Kilmarnock Barassie on Sunday the 5th of September. 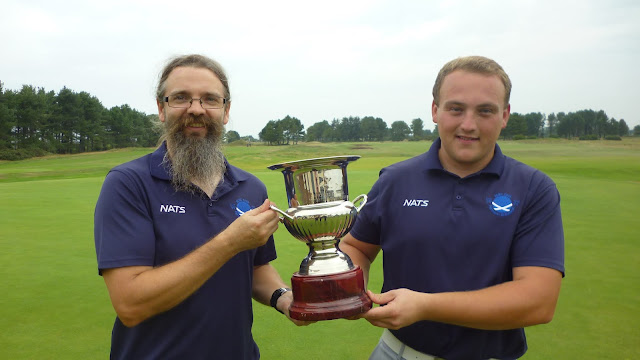 The pair from the Prestwick Centre club based at the National Air Traffic Centre in Prestwick, which was formerly known as the Civil Aviation Golf Society (CAAGS), faced the father and son team of Alan Stewart and Alan Stewart Jr. from Stewarton GC in the final which went all the way to the eighteenth hole and beyond before the winner was decided.

Aiden Long (+1)  was the lowest handicapper of the four finalists and gave four shots to Alan Stewart Jr (3) and 13 shots to both Alan Stewart (12) and his partner John Tanner (12).

It was the pair from Stewarton who took the early initiative winning the opening two holes and gradually extending their advantage throughout the outward nie, establishing a four hole lead after seven holes played. However, a par - birdie finish to the outward half was sufficient for the Prestwick Centre pair to take two successive holed to reduce the deficit to two down at the turn and they also took the opening hole of the inward half to be just one down with eight holes to play.

A birdie four at the eleventh by the senior of the Stewarts stopped the slide temporarily, reestablishing a two hole advantage for the Stewarton team  after eleven, but again the Prestwick Centre pairing came back to take two of the next three holes and square the match after fourteen holes.

Despite both teams having chances over the closing holes of regulation play, it was left to John Tanner to hole from a couple of feet on he final green to take the tie into extra holes.

At the first extra hole, Alan Stewart Jr had an outside chance of a winning birdie, but his long putt remained above ground and the players moved to the second extra hole, the 20th of the match.

Alan Stewart Sr and John Tanner both received shots at the second extra hole and it was John Tanner who seized his chance, and ultimately won the trophy, with a perfectly positioned tee shot and an excellent second shot to within ten feet of the hole which set up two putts, for a winning nett birdie three, to take the 2021 title.

Ayrshire Golf Association Vice President Scott Gilchrist (Loudoun) presented vouchers to the four finalists at the conclusion of the final, and handed over the trophy and commemorative medals to the winning pairing of Aidan Long and John Tanner of the Prestwick Centre Golf Club. 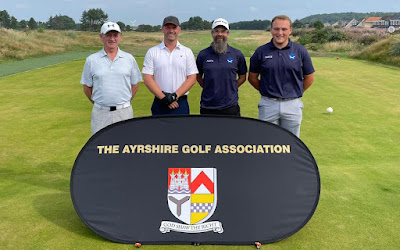